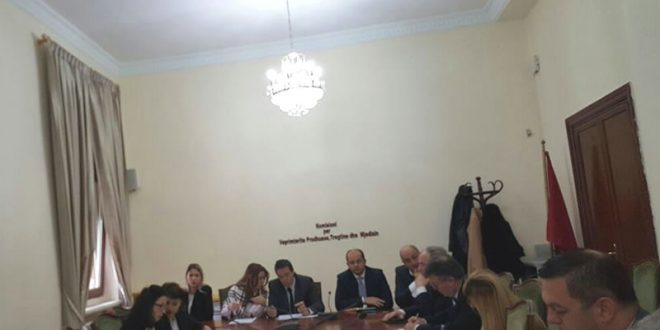 The Albanian British Chamber of Commerce and Industry addresses the Parliamentary Commission on Entrepreneurship, trade and productivity
The Chamber represented by the President Mr. Hoxha and two business representatives of membership presented their opinion to the Parliamentary Commission on the proposed legislation for change on the regulatory legislation on Chamber of Commerce Registration in the Republic of Albania.
The chamber put forward the argument that:

From a technical point of view while it acknowledges that only some 0.7 percent of the businesses operating in Albania take part in the local chambers of commerce which is an extremely small and fragile representation of the community, the Chamber also recognises that such low wish of participation derivates from the lack of ability of the local national chambers to offer value for money services and representations to the businesses. The government it is, through the proposed legislation, forcing the businesses to become members while offers no real incentives or services in exchange.

This will create a situation where by companies will be force to pay another tax for which they will not know how it is used nor have the employees of the national chambers any legal responsibilities to be held accountable for misuse of such income which it is anticipated to be as big as some 11 M Euro per annum.
From a lobbing point of view the local national chambers will gather every type of business in and will have no way to focus or promote the interest of one part against the other. While on the other hand non government organisation which are industry focused are more equipped to support their members and represent them accordingly without conflict of interest.
Furthermore the appointment by the government of the General Secretary of the local national chambers will automatically lose the independence that such organisation should have and show to have.

From a constitutional point of view the proposed legislation will deny the right of choice as constituted in the Albanian constitution.

The head of the parliamentary Commission for the Entrepreneurship, Trade and productivity of the Albanian Parliament publicly announced the decision by the Commission to take more time to look at the proposed legislation, to demand further explanation by the relevant Ministry and groups of interest as well as to request further statistics nationally and internationally on the best practise of chamber of commerce’s.

The Albanian British Chamber of Commerce and Industry it is happy to see that our opinions have been taken into account and that we will forward the relevant required supporting information to the Commission to help them come to a decision.