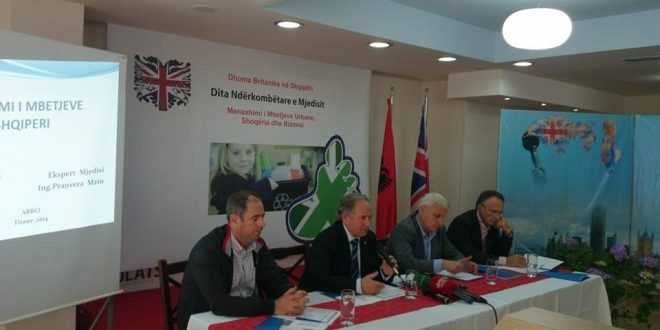 ABCCI organized a meeting on the Waste Management

The British Chamber in Albania organized a meeting on the Waste Management in Albania on the 4th June 2014.

Participants at the meeting were representatives of the Municipalities from all over Albania such as Saranda, Korca, Fieri, Rrogozhina, Tirana, Kamza, Lezha, Shkodra and Malsia e Madhe. The Ministry of Environment represented by the General Director of Environment Mr. Abeshi informed the participants on the new legislation coming to force in January 2015, on the environment whereby all the businesses will have a differentiated payment practice and methodology addressing the impact that such businesses have on the environment.

There were several good practices brought in at the meetings, aiming at road showing the opportunities that exist for the entrepreneurs in Albania in getting involved with the recycling. One of the best practice came from on Albanian living in UK, involved in the business of recycling used tyre. The recycling reduced the number of the used tyre as produced energy oil, iron and other prime elements to be used in various industries.

The example of the Italian investor coming to Albania and investing in a mentality changing project, with the recycling, it was one of the best prices which started a lot of discussions and questions from the Municipalities wishing to replicate such initiative. The company is contributing with their recycling of paper, glass and PET while it is a very social oriented as it informs the school pupils on the way they should handle the issue and contribute to the general good.

The event will be continued by on field visits to discuss with the local government on the way forward on recycling.