ABCCI wins the Award for Excellence

ABCCI wins the Award for Excellence “In Corporate Social Responsibility 2013″ 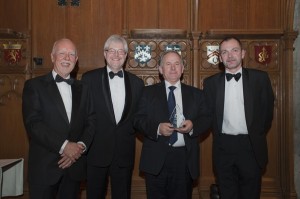 Albanian British Chamber of Commerce and Industry (ABCCI) was awarded the Award for Excellence in Corporate Social Responsibility 2013, COBCOE Awards, presented and celebrated at the wonderful Gala Dinner evening on the 10th April at the Guildhall.

The Chamber has received, from many European Chambers, best wishes and congratulations for the remarkable achievement. The Award to ABCC it is an award that belongs to its member companies due to their generosity, vision and CSR commitment for supporting the Chamber’s work and initiative on reduction of poverty.

The Gala Dinner, honoring the 40th anniversary of the Council of British Chambers of Commerce in Europe, was hosted and supported by the City of London Corporation and the Guest of Honor Lord Green, Minister of Trade and Investment.

The Albanian British Chamber of Commerce & Industry for an incredibly innovative, far reaching and impactful project tackling a national social issue of youth unemployment supported by UNDP that has truly promoted a valuable CSR agenda, engaging the support and active and collective participation of members to address a serious subject for the national good.