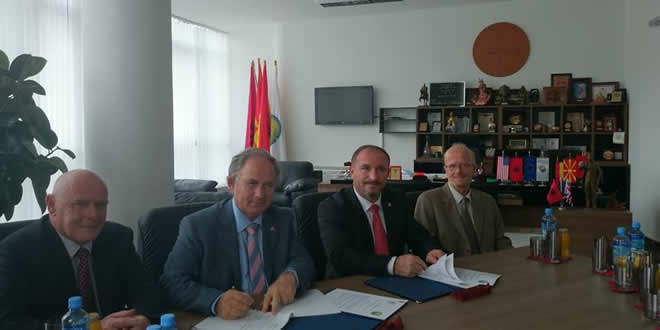 The British Chamber representing the Cambridge English part of the Cambridge University, for Bulats testing has signed on the 20th of June 2014 the cooperation agreement with the State University of Tetova aiming at supporting the efforts of the University to prove some of the best standards on the education.
The University will from now offer the test of Bulats on line.

e Chamber recognizes that the University has come a long way from the 17 December 1994 when it was funded from a group of Albanian professionals wishing to provide equal opportunities for the Albanians of Macedonia. The University it now home to some 17000 students in 11 faculties and two research institutions.

Present at the ceremony was the representative from the Cambridge University for the Cambridge English Language the department of designing the courses and curricula for the language and the international tests for English, Mr Michael Carty.

The President of the Chamber Mr. Hoxha confirmed that the Chamber it is happy to support the university and create a network of the regional and British Universities for exchange of expertise as well as creating joined programs.

The Rector of the University Prof. Dr. Ameti briefed the guests on the achievements, the priorities and projects ahead based on the academic structure and regional developments. The Rector made it clear that he is happy to invite and offer all the best of the best of the education from around the world to work with the State University of Tetova.

The token of recognition offered completed the message of peace and prosperity: a work of art portrait of Mother Teresa.