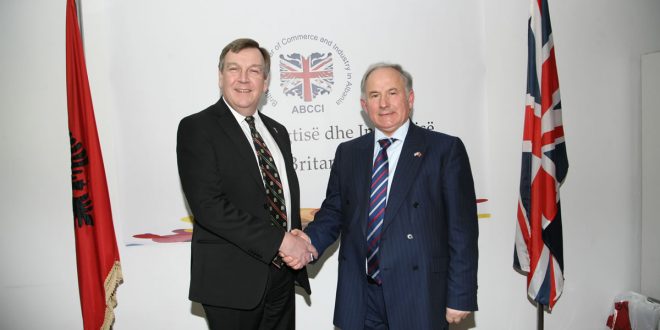 Delegation of the UK Parliament met members of the ABCCI Board

At the offices of the Albanian British Chamber of Commerce and Industry, a delegation of Members of the UK Parliament (including both House of Commons and House of Lords) met members of the Board of the Chamber to discuss the ways in which business and investment between the UK and Albania can be developed further.

The President of the Chamber, Mr. Zenel Hoxha, commenced the discussion by asking for a show of hands as to how many of the delegation had previously been to Albania and how many intended to come again in the future. Encouragingly, whilst very few hands were put up in answer to the first question, there was a unanimous show of hands in answer to the second.

Mr Hoxha commented on how warmly Albanians feel towards the UK. “In Albania, you have a trusted friend,” he said. This comment was acknowledged by the delegation with great appreciation.

The delegation was interested to hear the experiences of the members of the Chamber and their suggestions as to how the relationship between the UK and Albania could be further improved. This included an interesting insight by the Country Manager of BP in Albania and Member of the Board of the Chamber, Mr. Izet Loloci, on the development of BP’s business in Albania during the last 25 years. He discussed the challenges that the company has faced over that period and the fantastic progress that Albania has made in enabling British business to prosper in this country.

The comments by Mr. Loloci were followed by a fascinating speech given by Director of Albanian food manufacturer Miell Tirana, Mr. Roland Hysa, who praised the tremendous help given to him by the Chamber in his negotiations with international suppliers of raw materials. As a committed Anglophile Roland, like many successful business people in Europe, has sent his children to school in England, having recognised the life-enhancing opportunities conferred by a British education.

One of the members of the delegation was interested to hear of the experience of Mr. Neil Budd, a UK lawyer at English law firm Shakespeare Martineau, who was at the time on a business trip to Tirana trying to develop opportunities for international businesses looking for commercial opportunities in Albania primarily in the field of renewable energy. Shakespeare Martineau has developed a close relationship with the Chamber and Mr. Budd remarked on how helpful the Chamber has been in opening up opportunities for dialogue with both Albanian businesses and municipal authorities which could enable his clients to use their expertise and financial resources to carry out business opportunities with counterparties in Albania and in so doing to help develop the Albanian economy.

Mr. Pound MP expressed his amusement to the wonders of the Albanian nature and tourism potentials. He was adamant on encouraging the Chamber to dedicate far more promotion efforts to the Albanian Tourism. The British Tourists will love Albania. He stated that “The potential for tourism is absolutely, utterly limitless”.

The delegation also raised the issues, which are of frequent concern to foreign investors to Albania, as to whether property rights are properly respected and whether the rule of law is adhered to by Albanian public authorities. This query was address by Mr. Bilal Kola, a lawyer and Member of the Board, who was able to confirm to the Chamber that foreign investors could be assured that they should not be worried about these matters. Mr. Hoxha added to these assurances by confirming that the Chamber is able to provide peace of mind to foreign investors because of its status and the esteem with which it is held by public authorities in Albania.

Professor Shpresa Deliaj, Head of the English Department at the Tirana University, enlightened the visitors on the work of the Chamber in support of the promotion of the British Culture and training English teachers among others.

Lord Dykes, recalled a meeting with Mr. Hoxha at an event hosted by His Excellency Prince Andrew at the St James Palace in 2009 on the occasion of the 60th anniversary of NATO. At the event Mr. Hoxha lead the first Albanian Delegation to be invited at the St James Palace. Lord Dykes confirmed his support for the work that the Chamber as he felt that there are quite a lot of opportunities which requite a better promotion to attract foreign investment.

All-in-all, the meeting was extremely friendly and the Chamber came away with a very positive impression of the enthusiasm felt by the UK politicians toward the work of the Chamber and the opportunities presented for both Albanian and British businesses.

It is to be hoped that the goodwill engendered by the meeting will encourage positive action to be taken by both members of the Chamber and the UK politicians and that this will translate into real opportunities opening up for businesses in both countries.