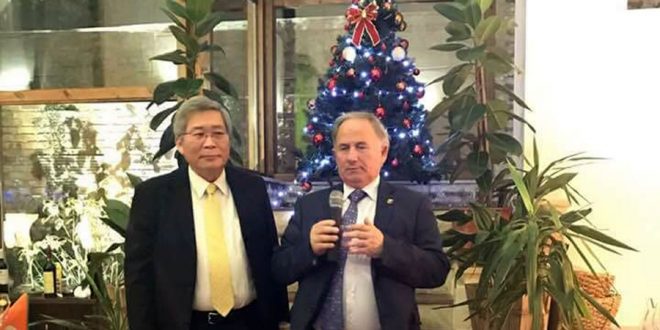 23 December 2017 celebrating Christmas, New Year and the Birthday of the Japanese Emperor’s Birthday.

The Chamber organised a festive Dinner with businesses and Japanese community in Tirana, Albania and the participation of representatives of the Japanese Embassy in Tirana Mr. Mr. Naotaka Sakaguchi and various members of the Embassy.

The Japanese Embassy has opened, for the first time, in the Republic of Albania. While there is a long history of cooperation with Japan.

The government of Japan has assisted Albania with financing of projects in road reconstructions, water irrigation system and eco-friendly projects. Some of the last projects financed by the Embassy it is reconstruction of three schools in north of Albania at the value of 140 000 Euro, donation of materials for the flooding worth at 30 000 Euro, donation of equipment’s for Hospital in Tirana QSUT the among other multi donor projects. Japan’s Official Development Assistance to Albania amounts 25.278 billion yen in total, or approximately 179 million EUR (as per may 2014).