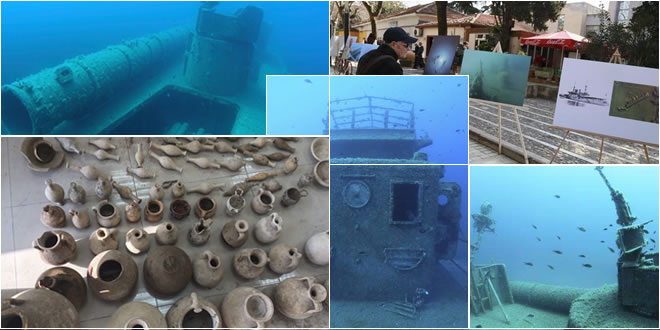 Help us to promote the Albanians potential of underwater archaeological heritage and bring it to light.

Albania is promoting the archaeological finds in the waters off its southwest coast to raise public interest and to attract attention of decision-makers who can help preserve the discoveries.

The Albanian National Coastline Agency opened an exhibition on Monday of 30 pictures showing underwater finds of potential archaeological significance from the last decade.

Tare says the ships and other objects “show ancient Illyria (Albania’s predecessor) was a commercial pass rather than a pirates’ place. We have a lot of such archaeological underwater heritage but, so far, we have not known how to keep, preserve and use them, ” He says the archaeological wealth of Albania’s 220-mile coastline needs more legal protection and better care to make it a popular tourism destination.

The exhibition includes photos of amphorae — two-handled storage pots and jars used for wine or oil in ancient Greece — and other items encrusted with tiny shells.

The wreckage from ships are thought to represent a much longer time period, from the 6th and 5th centuries B.C. and the Austrian-Hungarian Empire during World War I, to British or Italian navy vessels from World War II.

During the communist regime that ruled Albania until 1990, the army’s control of the coastline deterred smugglers who might have been tempted to disturb submerged artifacts. Many items since have been stolen.

The nautical archaeology department at the Albanian Institute of Archaeology started collaborating 10 years ago with the RPM Nautical Foundation, which is based in Key West, Florida, to scan the ocean floor and remaining relics.

“That great archaeological wealth should be shown to the local population to preserve it and worldwide due to its research importance,” Ceka said.

The Chamber would like to invite expertise to contribute and suggest on how to support and advice the Albanian Government on preserving the discoveries as well as commercialising it in the benefit of the marketing of Albania. Please contact us at info@abcci.com

Previous Tirana to become a greener city
Next Workshop with the Polytechnic University of Tirana, 17 April 2017