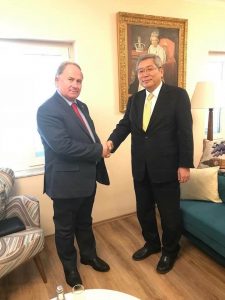 The President of the Albanian British Chamber of Commerce and Industry (ABCCI) received today in its headquarters the Deputy Ambassador of Japan in Tirana. Mr. Zenel Hoxha informed Mr. Naotaka Sakaguchi, on the Albanian economic reality, focusing on the potential areas where the Japanese government and business companies could intervene through their direct investments. “I am pleased to say that I found the understanding and the interest of the Japanese diplomat for four projects, which are of huge interest to our members, associates and clients,” said Mr. Hoxha. They are:

The Deputy Japanese Ambassador Mr. Naotaka Sakaguchi, underlined the necessity to further develop the economic ties between the two countries. He noted as well that: “the Albanian British Chamber of Commerce and Industry will play a significant role, as it enjoys an admiring reputation due to its seriousness and professionalism shown over the years.”

The Japanese government has been present in the past 20 years in Albania through many significant projects. Its financial contributions towards the agricultural sector, drinking water supplies systems to many cities were highly efficient and are much appreciated.

Previous Meeting with British Investors, November 14th
Next Metting on Municipality of Shkodra