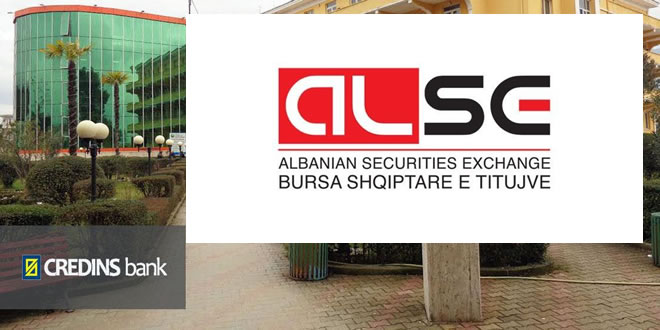 The accreditation body has license the new company where Credins Bank is one of the main shareholders with 42.5% of the capital of ALSE. Such initiative it is considered important as it reflects the dynamics of the market and enables access in the Albanian Market for international companies wishing to invest and trade. It is hopes that ALSE will enable companies, Government and Local Government to get access on international financing mechanisms, supported by the technology and human expertise, while the transparency and better corporate governance will be required of the participation parties.

Albania has established its first Stock Exchange in 1996, by name of Tirana Stock Exchange, as a department of the Central Bank of Albania with the aim to spin it off after a transitional period of several years. It is organized as an order driven market. The activity at hand was the trading of the T-Bills with 12 months-to-maturity, five series of government bonds and privatization vouchers. Trading sessions were held, firstly, twice a week, every Monday and Thursday. By October 1997, the sessions began to be held every business day and the trading of 3 and 6 months-to-maturity Treasury Bills commenced too. It also held out the primary auctions for Treasury Bills until August 1st, 1998, than this market moved to Monetary Operations Department, at BoA. There was no stock trading in TSE.

As of July 1st, 2002, TSE spun-off physically form BoA and continued its activity as a stand-alone institution. One year after, TSE obtained the final license from Albanian Securities Commission to operate as an organized market on financial instruments. This license was renewed again in 2005. After that renew again its license for unlimited period.