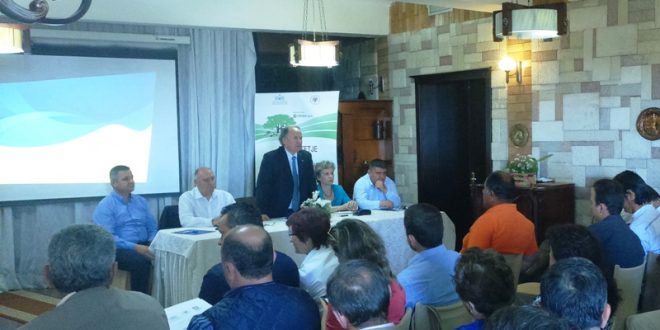 The British Chamber of Commerce in Albania has announced its support for the development of the agribusiness aiming at expanding the production area, adding value to the production by certifying the quality of the production as well as introducing suitable packaging for the local and international market requirements.

Currently the trends have shown that there is a need for the supply chain to diversify the origin of products in order to overcome any possible lost of supply due to the climate change as well as the current unrests which risk the traditional distribution channels.

Albanian population, on the other hand, migrated from the villages to the cities and an abandonment of the agriculture land which render agriculture or forestry restoration use impossible or too costly. In order to reverse this trend, market led solutions are not always feasible in the above-mentioned context of low economic potential, since the area cannot economically compete with other areas. In this case the community may decide to leave the area to its own fate or the community may assign a non-monetary value to the area or may value its function as a public good, which makes it profitable for the community to sustain the area. As this happens predominantly through supporting specific economic sectors or activities (i.e. subsidies), it is contested by liberal economists and does not comply with some of the WTO regulations. Even if in recent years agricultural and rural development policies have adjusted to this criticism and have become more free-trade compatible there is still pressure on further reforming these policies. There is also growing demand for maintaining the socio-economic viability of rural areas, in particular in remote and mountainous locations, which calls for a combination of different sector and rural development policies compatible with international rules and regulations.

The Chamber has organised several round tables with local producers in Lushnja, Saranda,  Peshkopia etj  which are the main production area of the early agro products in Albania. While Korça, Devolli, Malsia e Madhe have the highest productivity of the late summer products as well as highest of the fruit production such as of apples, cherries, beans, potatoes and medical herbs etc.

At the meetings the participants expressed their willingness to cooperate with the international donors. The donors are focusing in adding values to the production such as expanding their production area, the quality assurance and export certification. Producers also expressed interest in processing their products as a mean of improving competitiveness and increasing revenues.

Several companies from area of Lushnja emphasised the need for better planning and irrigation system in the area as a must measure to be taken by the government and which is a main obstacle to the faster growth of production in the area. While on a private note the companies where happy to take advantage of the funds available as well as cooperating with Credins bank which has proven to be able to understand and offer products to their needs.

In Korça the main problem faced by the farmers was luck of access to the international market. The production from the area it has still to increase its size in order for the cost of production to be lowered. Currently there is no regional coordination on the type, quantity and quality of productions for the area as there is a lack of a cooperation platform among framers. Therefore they were faced with overproduction of certain products on one year and lack of it the next year, which has damaged the market and potential for international buyers to enter in long term agreements. The quality standards were a innovation and many of the farmers faced a true dilemma on the need of implementing them. On the other hand the land ownership has been considered by most the main obstacle for any bank loans or government grants. The representative of Credins Bank offered to support the applicants with advice and hand handling to the success of their loan application.

The meeting in Peshkopia brought together producers and processors which had a long experience in good land management and minimal land ownership problems which made the area ideal of investment in fruit production and processing as well as animal farming.