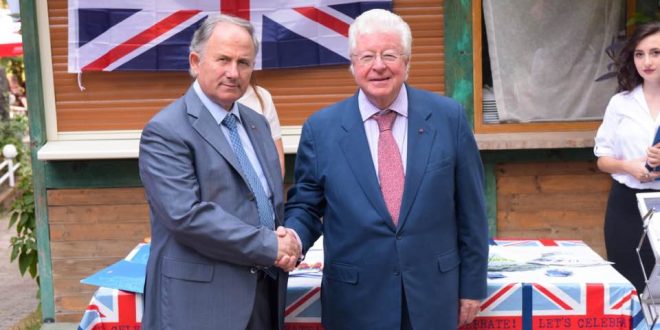 Lord Watson is the Patron of the Albanian British Chamber, happy to support and advice British, Albanian and International companies on how to further develop trade in the region as well as to support communities for a sustainable development.

During his visit Lord Watson meet various important representatives of Albanian Government and of the political spectrum to talk about the future of Albania in its efforts to join the European Union.

The chamber organised an all member meeting on the 12th July 2016, to discuss among others the impact of the Exit Vote for the Albanian – UK Trade. Mr Hoxha the President of the Chamber spoke to the participants on the work, achievements of the Chamber in this important mile stone of its 15th approaching anniversary.

The meeting was chaired by the board member the Country Representative of BP, the biggest Uk investor in Albania via TAP project, Mr. Izet Loloci. Further to the summery given on the work of the Chamber by the Board Member Mr. Bilal Kola he put emphasises on the opportunities ahead and the possible projects to get involved.

Lord Watson of Richmond, CBE visited Shkodra on the 13th of July.

Lord Watson was welcomed at the Municipality of Shkodra by the Major of the City of Shkodra Mrs. Voltana Ademi. Lord Watson and Mrs. Ademi discussed on how to increase awareness on the potentials of the city in order to generate interest from not only tour operators and travel agencies but also business developers and researchers in order to have some of the ancient history of the city uncovered and published.

The visit of Lord Watson continued with various meetings aiming at integrating the region including Kosova. Lord Watson of Richmond met with the Minister of Education, Science and Technology Mr. Arsim Bajrami and discussed the integration of the Kosovan youth in the English Speaking Union giving them the opportunity to create more intercultural understanding and progress together by the use of English language. Mr. Bajrami offered important support for the Union soon to be founded in Kosova.

For a more detailed information on the past and future events: please write to us at info@abcci.com