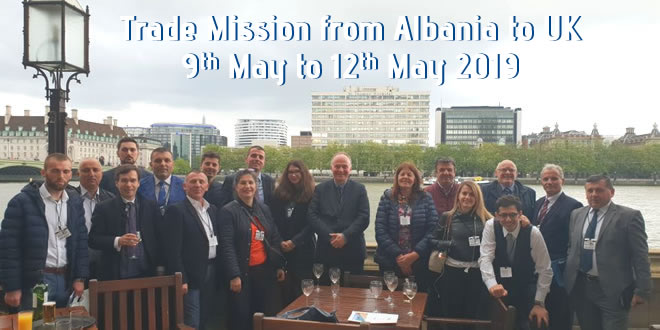 Trade Mission from Albania to UK

The Chamber hosted a set of meetings aiming at promoting Albania and the investment potentials. The Round Table discussion in the House of Commons on the theme of Investment in Albania supported and chaired by John Grogan, Member of Parliament and Chair of the All-Party Parliamentary Group on Albania brought most of the participants together to a landmark setting and a drinks reception at the House of Commons Terrace on the 9th May 2019.

The participants who flew into London for the event came from a variety of positions in selected Municipalities and Districts of Albania: Mayors, Deputy Mayors and Senior officials in Local Government. Also, in attendance were Albanian Nationals working in various capacities in the UK and International companies. All of them were interested in exploring the possibilities of investments which would benefit the country.

The meeting at the House of commons of the 9th May 2019 was also greeted by the HE Qirjako Qirko , the Albanian Ambassador to the Court of St James. He gave an overview of the situation in Albania which would prove favorable to investors. He stressed the potential the country has to offer and went to great lengths to dispel any negative perceptions that might exist and deter investors. He provided a very helpful overview of the potential which exists in such areas as energy, the environment, security and tourism. His message was that the country is as safe or indeed safer than most other European countries. He emphasised the Embassy was in a key position to give advice and support to investors and in this respect works in close partnership with the Chamber. We are grateful to him for his continuing interest in matters pertaining to the Chamber’s mission.

His address was followed by a brief presentation by Mrs Ana Verushi, Head of Korca District, South Eastern Albania. She outlined the potential in this area and what has been achieved so far. It is evident that this area offers marketing potential especially as it is located in the centre of fertile farmland which yield a range of agricultural produce; fruit, vegetables, honey and olive oil. Its close proximity to the Greek border facilitates the export of goods to neighbouring countries. A regional airport is planned for Korca in the future which will have obvious benefits for commercial enterprises and tourism.

The introduction and offer by the Woods and Eagle Ltd confirmed that such companies can work and invest in Albania providing that the government offers a ease on doing business. It illustrating a number of projects in the Middle East and North Africa which involved the construction and maintenance of power plants and the harnessing of natural resources such as water, wind and sunshine that Albania abounds.

The final presentation was given by Mr Patrick Strong, Director of Business Development for the Chamber. In giving an overview of the country’s potential he drew on 24 years involvement in Albania. He emphasized the changes that have taken place in that time especially regarding infrastructure and the vast improvement in the road system. As an example, to road to Kukes has been restructured to cut the travel time from 6 to 2 hours. It is an indication of what can be achieved given the right investment and the will to succeed. The country is now stable and the government welcomes investors for whom they will provide incentives to make investments worthwhile.

He urged the Municipalities and Districts to come forward with suggestions and proposal which the Chamber would refine and seek UK investors. This offer is also open to adjacent Balkan countries.

There was the opportunity for questions to the panel of speakers and the range of issues raised demonstrated a desire to do business with the UK. The Chamber has considerable resources at its disposal and will actively engage in discussions to convert plans into a working reality. The message was that if we don’t know your interests and outline plans, we are not in a position to help you.

In conclusion John Grogan was thanked for his support and interest in Chamber matters and his willingness to support positive change and business development.

Members of the Trade Mission walk the ground of Margaret Teacher, Churchill and touch their history.

Mr John Grogan MP, arranged a conducted tour of the House of Commons culminating in refreshments on the terrace of the House which overlooks the Thames. It was a momentous occasion especially being able to stand at the “despatch” box in the MPs debating Chamber and it has a greater value as now the world and naturally Albania and the region should debate and find the best and wises way forward for economic development with integrity.

The Chamber organised business to business meetings for the participants of the Trade Mission with investors interested to take into consideration the investment potentials.

International Trade Development Ltd hosted a meeting in one of the London’s landmark Hotel at the Halkin Hotel, where delegated were happy to see that the manager too was Albanian. The discussions conveyed around the potentials that the municipalities have to identify and promote investments which then can be arranged via PPP projects. Waste management and renewable energy were among the most potential ones.

The meeting with Eco Products Ltd is hoped to soon develop a new supply chain with Albanian Agriculture Products into the UK market.

Participants from Albania also attended the A Place in the Sun Exhibition in London Olympia. The exhibition has been running for many years offering the opportunity to the UK house buyers to purchase a holiday home or permanent one in hot Mediterranean countries. Albania is one of the only places not present by stand. The participation by the trade mission hopes to encourages more of the local government to invest in this type of publicity too.

London by boat, the delegated experienced London from a different point of view and contemplated that many of the developments need their time to come to life while the vision and the legal frame work is the first important step towards make it reality.