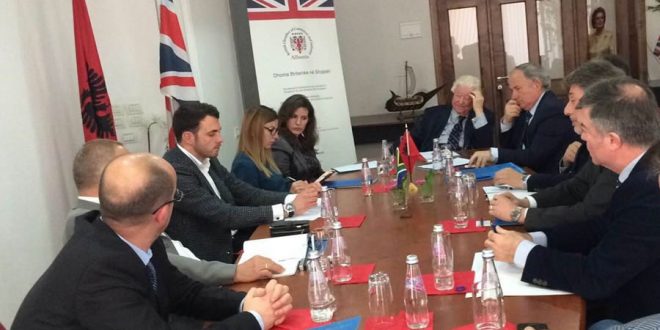 At an unprecedented meeting involving six bilateral chambers of commerce held on 3rd of May 2017 at the headquarters of Albanian British Chamber of Commerce and Industry it was agreed to coordinate our efforts on providing unified and simplified support to Foreign Investors wishing to enter Albania, if they are going to make a success of their investments in Albania.

The meeting was chaired by the Patron of the Chamber Lord Watson of Richmond and its Chairman Mr. Zenel Hoxha

At the meeting which lasted 1h and 30 minutes there was unanimous agreement that foreign investors in Albania face real difficulties, including a lack of transparency on the criteria for Parliamentary decisions and on the enactment of the decisions themselves. This can involve long delays in the courts and arbitrary changes of agreed term and condition, altering the fundamental business opportunity involved.

The view was expressed that part of the problem is that the needs of business are simply understood by enough politicians and Parliamentarians. It was agreed again unanimously that a joint statement would be drawn up by all the Chambers of Commerce, which would include a clear statement of what assurance foreign investors require, if they are going to be confident about their investments.

All those who attended fully recognised the economic potential of Albania in many sectors such as mining, tourism and agriculture and their shared sense of frustration that this potential was not being realised as it need to be.

The group will circulate its statement of agreement to Parliament and will welcome a more intensive and committed dialogue with the government and the opposition parties after the forthcoming election. The group will meet again in June at the Premises of ICC Albania.