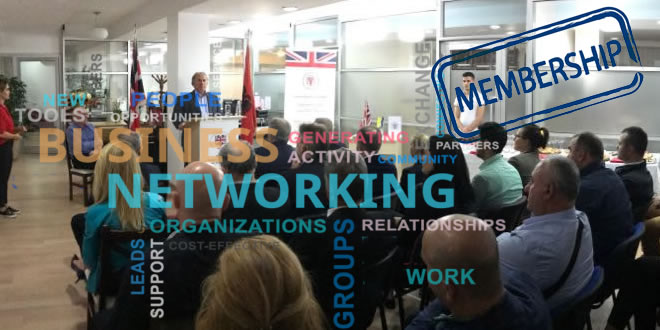 A total of 10 new members were recently enrolled in the Chamber, 6 of who were present to receive their membership certificate. Over 40 people attended the event.

Mr. Zenel Hoxha welcomed those present and spoke briefly about the important role of the Chamber in promoting trade between Albania and the UK

Patrick Strong Director of the Chamber formally welcomed those present and congratulated them on their wise decision in joining the Chamber and thanked them for their faith in the Chamber. He pointed out that membership of the Chamber opens doors through which their individual businesses can prosper. It was important that they let us know what their needs and problems are so we can address them directly. Mr. Strong  outlined the various ways in which the chamber  can help them; through  researching business opportunities , networking, lobbying Governments on their behalf, advising on taxation and patents, English language translations and the provision of training. He invited them to utilize the facilities of the Chamber offices for meetings and gatherings especially if they came from outside Tirana. These facilities are free of charge.

Mention was made of the events held in London and other British Cities from time to time. At any time, there was an exhibition or trade fair catering for every need and the Chamber would draw these to member’s attention and facilitate their attendance.

The Certificates were then presented in turn by Patrick Strong, Mr. Gëzim Musabelliu the Minister of Infrastructure, Izet Loçoli, Director of the Chamber, the Mayor of Skrapari, Nesim Spahiu and Mr. Zenel Hoxha. Photographs of each presentation were taken and each recipient gave a brief outline of his/her business. In this way the principles of networking were met. The following were in receipt of membership certificates but not all were able to be present on the evening.

The person that didn’t come but we have certificate for them:

At the conclusion of the formal part of the proceedings Mr. Strong reminder everyone that the best source of recruitment was personal recommendations. He urged everyone to tell their business colleagues and friends about the Chamber and the advantages of membership and proceed with their application.

Following the formal part of the evening light refreshments were served and everyone enjoyed the conviviality of the evening and the opportunity of mixing together.