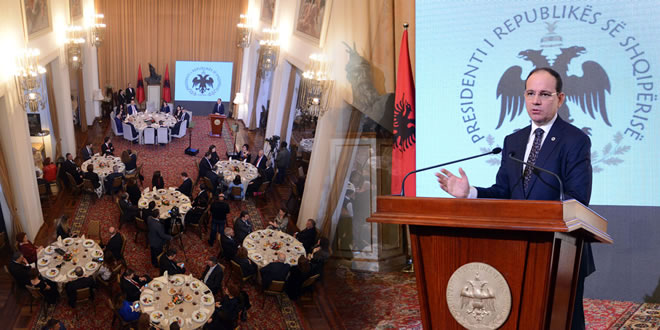 On the 19th February 2016, the British Chamber and several of its members were invited to take part at the Gala Dinner at the landmark location for the history of Albania the Palace of Brigates build during the reign of King Zog in the middle of the National Park of Tirane.

The Chamber has, during the past years, organised various events in support of promoting the business opportunities in Albania as well as increase of trade between the two countries. In some of the events the President of the Republic has honoured them by taking part. The Chamber has also supported various activities which help the teachers and schools students to enhance their performance. “All of our work would not be possible without the support of our members.” This is the message that the board has taken to the President of the Republic in many occasions.

Therefore we are happy to see that the award ceremony saw three of our members been priced as well as the ceremony to have started with our board member BP.

The Award Nr 9440 to British Petroleum for “Special Civil Merits” is based on: “In appreciation of the highest standards offered during the 20 years of operation in Albania, for the successful partnership in one of the most important projects which connects Albania to the region, the Trans Adriatic Pipeline as well as for its great social –economic impact and contribution in Albania and the region.”

The award number 9441 to Raiffeisen Bank for “Special Civil Merits” is based on: “In appreciation of the highest standards applied int eh banking system in Albania for its 10 years of operation in Albania, its support for the development fo the country through introduction of vast number of products and for its contribution and support for the social projects in Albania.”

The award number 9946 to Mr. Muhamet Malo for “Special Civil Merits” is based on: “In appreciation of his contribution to the promotion of the Albanian landscape, by considerably investing in Dajti Express and offering a best spoken service in the hospitality industry adding value to the tourism in Tirana as well as for his donations and support of many sportive events locally and internationally”